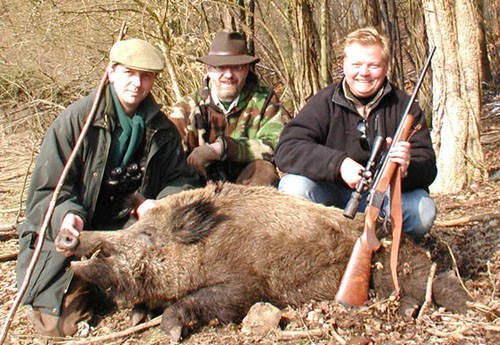 The largest country in western Europe, France hosts the largest number of foreign tourists in the world each year.  Famous for its foods, wines, culture, and its great cities, France has enjoyed over two thousand years of hunting history.  Once reserved for kings and courtiers, France’s rich wildlife resource is now enjoyed by thousands of French hunters and many visiting sportsmen every year.  Blessed with large tracts of forests, two mountainous regions, and vast rolling agricultural lands, France provides ample habitat for wildlife to thrive.  Home to some of the most magnificent of Europe’s sights and finest cuisine, France makes an ideal vacation destination for hunters and their non-hunting companions alike.

Most of the common continental species are found in France in abundance.  These include red deer, fallow deer, roe deer, mouflon and wild boar.  In the mountains there are also two types of chamois and Alpine ibex (which are protected at this time).  As in other countries of western Europe, most hunting nowadays is done on private estates, where game is managed by professional game keepers and where guides follow age old traditions of scientific game management.  The game is owned by the landowners and the harvest quotas are set according to the principles of sound management, including good population ratios of sex and age, as well as trophy quality.

The Hunting Consortium has offered a variety of hunting options in France for more than 30 years.  We are pleased to offer well organized stalking hunts for hoofed game in three major regions:  In the dense forests within a 100 mile radius of Paris, we arrange hunts for red deer, roe deer, fallow deer, and wild boar.  These same species may be hunted in the scenic, mountain forests province of Lozére, as well as in the beautiful Pyrenean Mountains, where we also offer hunts for Pyrenean chamois.

The Hunting Consortium also offers wing shooting on selected estates throughout the country.  Driven pheasant is popular, with daily bags exceeding 500 birds, as is shooting for ring doves (wood pigeons) and partridge.   In the south of the country, the duck shooting is excellent.