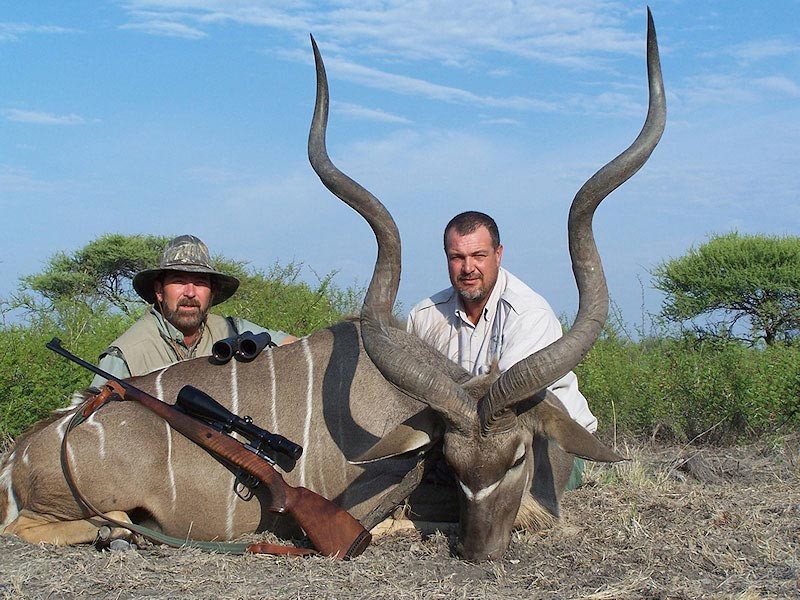 After centuries of ethnic and Arab rule, slave trading, Portuguese colonialism and decades of  devastating civil war,Mozambique finally became a democratic republic in 1990.  This long country  with nearly 1500 miles of coastline, about twice the size of California, borders Tanzania to the North, Zambia and Malawi to the Northwest, Zimbabwe to the West, and South Africa to the Southwest.  To the East of Mozambique, lies the Indian Ocean.  A vast plateau  covered with savannah and open Miombo woodlands  rises up toward the mountains in the west and north which accounts for nearly half of the total  area  of Mozambique.  The western and northern highlands are patched with dense forests. The Zambezi is the largest of the 25 main rivers flowing through Mozambique into the Indian Ocean.  This rich and varied habitat, with relatively small human population, has enormous potential and is regaining its once proud reputation as primary safari destination. Hunting Mozambique should be on every African hunter’s list.

Mozambique is famous for nyala, sable antelope, leopard, lion and big elephants.   In the north, the hunting is virtually indistinguishable from hunting in neighboring Tanzania.  The vast  Nyasa Reserve is the largest game reserve in the country, at nearly 20,000 square miles.  It is surrounded by hunting concessions, known as “coutadas”, where lion, leopard, elephant and buffalo are numerous.   Further  south the mighty Luganda River su

pports additional hunting concessions, where buffalo, sable, kudu, Nyasa wildebeest and leopard are common.  The primary hunting areas in the famous Zambezi Delta, where effects of the long civil war were most felt, are recovering and buffalo hunting in particular has improved considerably and numbers of sable, waterbuck, bushbuck and reedbuck are growing.  The areas along the boundary of the famous Kruger Park in neighboring South Africa were also hard hit by the ravages of the civil war, but plains game numbers are increasing and buffalo numbers are improving.   Gone are the days of big elephants in the south, but recently several large trophies have been taken in the north of the country -  including three elephants over 100 pounds.

The Hunting Consortium Ltd.  represents Mozambique’s finest operators and with a great selection of hunting areas  throughout the country, clients will have all of Mozambique’s hunting options at their disposal.   Safaris are constructed with the requirements of each client in mind, hunting the areas that will most likely produce the best trophies of the desired species.   The quality of service rivals that found in Zimbabwe and Zambia.

We at The Hunting Consortium  are pleased to offer a variety of hunting options in Mozambique, from simple plains game safaris  to the finest dangerous game safaris in the best concession lands in the country.  Prices in Mozambique are lower than in other “front line” African hunting countries, as the safari industry there has recovered from the effects of the civil war.  Consequently, Mozambique offers perhaps the BEST VALUE in big game hunting in Africa today.