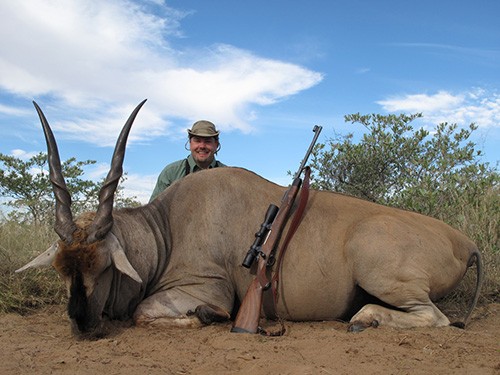 Botswana is the most popular destination for elephant hunting and the over-population there ensures a wide selection of bulls. Land locked and about the size of Texas, much of Botswana is semi-desert.  The parched, white plains of the Kalahari  extend over two-thirds of the country and border the Makgadikgadi pans.  In the north, the Okavango river opens into a massive delta and forms one of the most unique ecosystems in all of Africa.  The Okavango Delta, with its complex series of channels, lagoons and flood plains is alive with wildlife and one of the most beautiful photo safari areas in the world.  The delta is where photographers the world over come to make a name for themselves. Hunting is now restricted to the fringe of the Okavango Delta and surrounding areas.  The Chobe River is also renowned for its wildlife resources - especially its large herds of elephant.  Almost twenty percent of this country has been set aside for wildlife, either in parks, game reserves or in controlled hunting areas.  Strict game management policies have made the country one of the finest destinations for elephant hunting. Although Botswana has closed hunting for many of its most desirable species such as lion, leopard, sable, and sitatunga, and reduced harvest quotas for other species, it is still an excellent destination for elephant hunting, cape buffalo, and red lechwe.  It is the most consistent producer of heavy ivory (over 70 pounds) in Africa today.

During the past decade this country has produced the heaviest  ivory of all the countries in which elephants may be hunted.  Although Botswana was never famous for 100+ pound elephants in the hey-days of ivory hunting, numerous bulls can grow to old age there, an essential factor in producing large ivory.  Several elephants carrying over 100 lbs. of ivory have been taken in recent years.  Elephants in Botswana are famous not for their length, but for their mass.  The average weight of an elephant taken in Botswana is between 58 and 64 pounds. Every year however, 2-4 elephants over 80 pounds, including the occasional 100 pounder, are taken. In Botswana only a few concessions produce good ivory consistently.

The standard of outfitting has always been high in Botswana.  Luxury tented camps with full service staff are the rule, not the exception.  The big difference among safari companies is in the quality of the concessions they lease.  In this regard experience is essential in selecting the right company for the experience and trophy quality desired by the customer.